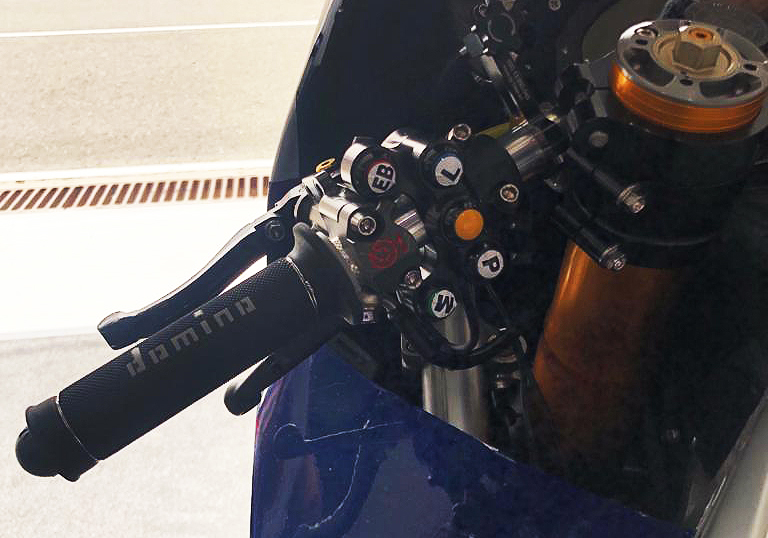 The technique of the Grand Prix does not stop evolving in all categories and the coming revolution, or rather, it is here because it has come to stay is the operation of the rear brake with the hand instead of the foot, a kind “scooter type” braking system to define it simply.

The rear brake has always been applied with the right foot, both on the street and in high competition, but in the latter scenario, things are changing.

Some time ago and on rare occasions some riders began to have a small lever on the left handlebar, under the clutch lever, which they operated with their thumb to use the rear brake. Over time, this circumstance has evolved to the present day in which, those who use this system such as the Moto2 rider Arón Canet among others (photos attached) have the brake to the detriment of the clutch that is replaced by a lower cam.

The causes of this evolution are mainly two. On the one hand, the fact that, at present, the clutch is used practically in a single way at the start and precisely at the start of the race, from that moment it is no longer used. On the other hand, operating the rear brake by hand, allows a greater degree of precision, touch and modulation of the braking since this is much more precise than the foot than in rigid boots, we also have the right curves, where some pilots they must delay the foot with little mobility and it is not always accessible due to the little space that is reduced due to the maximum inclination.

For these reasons, operating the rear brake with the left hand is gaining followers among riders of all categories and, in my opinion, it will be one of the technological adaptations that will be imposed in the short term and, it would not be surprising that manufacturers produce the competition motorcycles with this built-in feature that means goodbye to the brake lever located at the height of the right footrest of the motorcycles.

It is more practical, precise and, above all, it allows you to modulate braking at the different points of the curve or track where its use is important, I certainly believe it is much more effective.