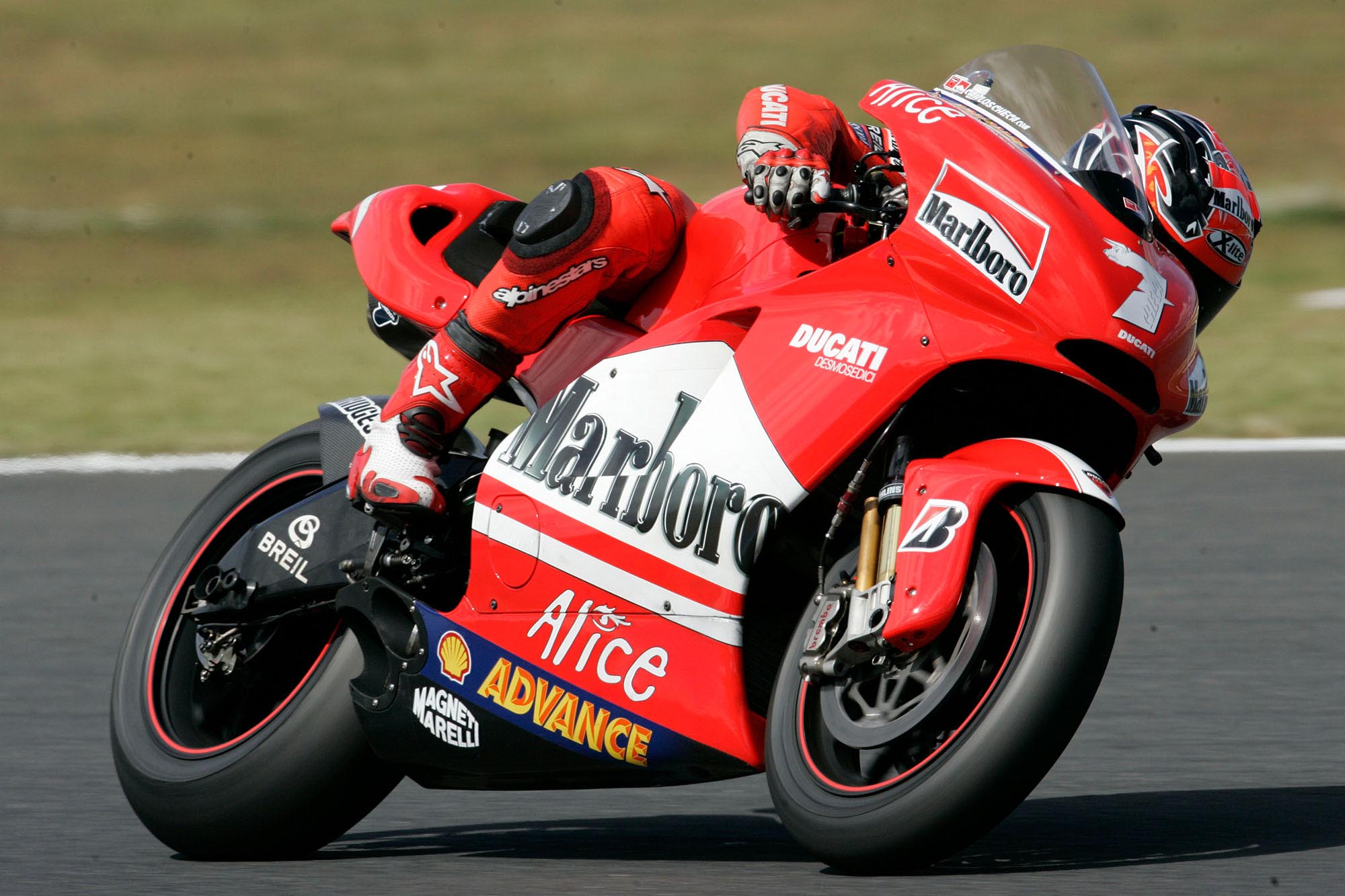 From red and yellow towards the change of third.

Ducati, Yamaha, Honda, Suzuka … Superbikes! Three seasons with three different motorcycles to end in another that had nothing to do with the previous ones; the Honda of Superbikes. The 8 Hours of Suzuka opened my eyes and redirected my professional career.

The Yamaha stage closed with the change to Ducati in 2005 to work, and much, on a motorcycle that had added nothing encouraging results in the previous season. I had to go back to work hard in the set-up, to grow a MotoGP motorcycle working hard in electronics and with the added difficulty of having changed tires to Bridgestone and having to evolve the tires, so all the work It should be done in a double direction.

We worked hard, we did a very important job and, in the last third of the season I was one of the drivers who added more points with two podiums included, in Malaysia and Australia. I had more than accomplished the work entrusted, but in Ducati they did not believe it that way and decided not to continue counting on my services.

It was difficult for me to understand the situation created when Ducati left, but the future looked encouraging with a proposal from Sito Pons to team up with Stoner riding the Honda. We trained in Valencia and Malaysia and the truth is that things went well and I was finally able to get on a four-stroke Honda, but after a short time, Sito told us that there was no sponsor and everything was blown up.

The situation was complicated with almost everyone registered and everyone was already working for the following season. I was unemployed when Yamaha knocked on my door again with an attractive and complicated project at the same time. It was about running on the Hervé Poncharal team but using Dunlop brand tires and carrying out all the development work on these tires.

Again I had to roll up my sleeves and work for an evolution of a technical nature and not just to find the best possible results. Dressed in bright yellow, I worked at the Dunlop in a year when entering the Top 10 was already a great reward. The front tire was really good, but the rear did not withstand more than 60% of the power of our Yamaha. He had to suffer and make a thousand changes and, above all, resign himself but, at the same time, see with pride, as when working on motorcycles and tires, brands valued my experience and indications.

In 2006, the change of propeller came to MotoGP with the incorporation of the less powerful 800cc engine. I have three offers on the table: continue with Yamaha, join Kawasaki or ride a Honda in the team of my friend Lucio Cecchinello. None of the three stands out from the rest. I am drawn to Yamaha as a factory because of my track record with them, but Dunlops are a limitation. For its part, the Kawasaki was a very young project.

We ended up opting for the Honda option thinking that it was the best motorcycle and the truth is that it was the worst combination of motorcycle and tires until the extreme that when I tried it for the first time in Malaysia, I stopped by my Technical Chief and great friend, Ramón Forcada, with whom I was working again after a good handful of years, I told him that the bike is broken because it doesn’t run. When after reviewing it, he told me that everything was fine, I snapped at Cechinello: “man, you have been deceived !!” The year was hard because I was not comfortable with the bike; it did not fit in it, it did not run and it did not hold. On the contrary, the team was exceptional and that was the good thing about the season in which my MotoGP career was coming to an end.

Something exceptional happened in the form of Honda’s invitation to run the 8 Hours of Suzuka with Tadayuki Okada at the end of July. I made the pole, we finished seconds and we got to win. It was fun, I rolled very well and I realized that, at that time, the Superbike was the way because I could drive it, understanding everything I did and reaching the limits I could not reach with the MotoGP.

The fate was already set. For this reason, the last Grand Prix in Valencia, I never got to dispute it thinking that something was ending, but that it changed course and destiny. Of course, I was about to not be able to run that race! and I did it in bad conditions because of a gastric occlusion that made me go through the hospital on Saturday night before the race. Was it clear that my stomach would no longer “digest” the 800 and needed a motorcycle change!
Luckily my friend and fatigue partner David Vilaseca, who has always been by my side, was there to lend me a hand in managing a weekend that could easily change sign. The arrival at the box after the final flag was emotional, but as I have already explained, for me it did not mean an end point, but a point and apart.