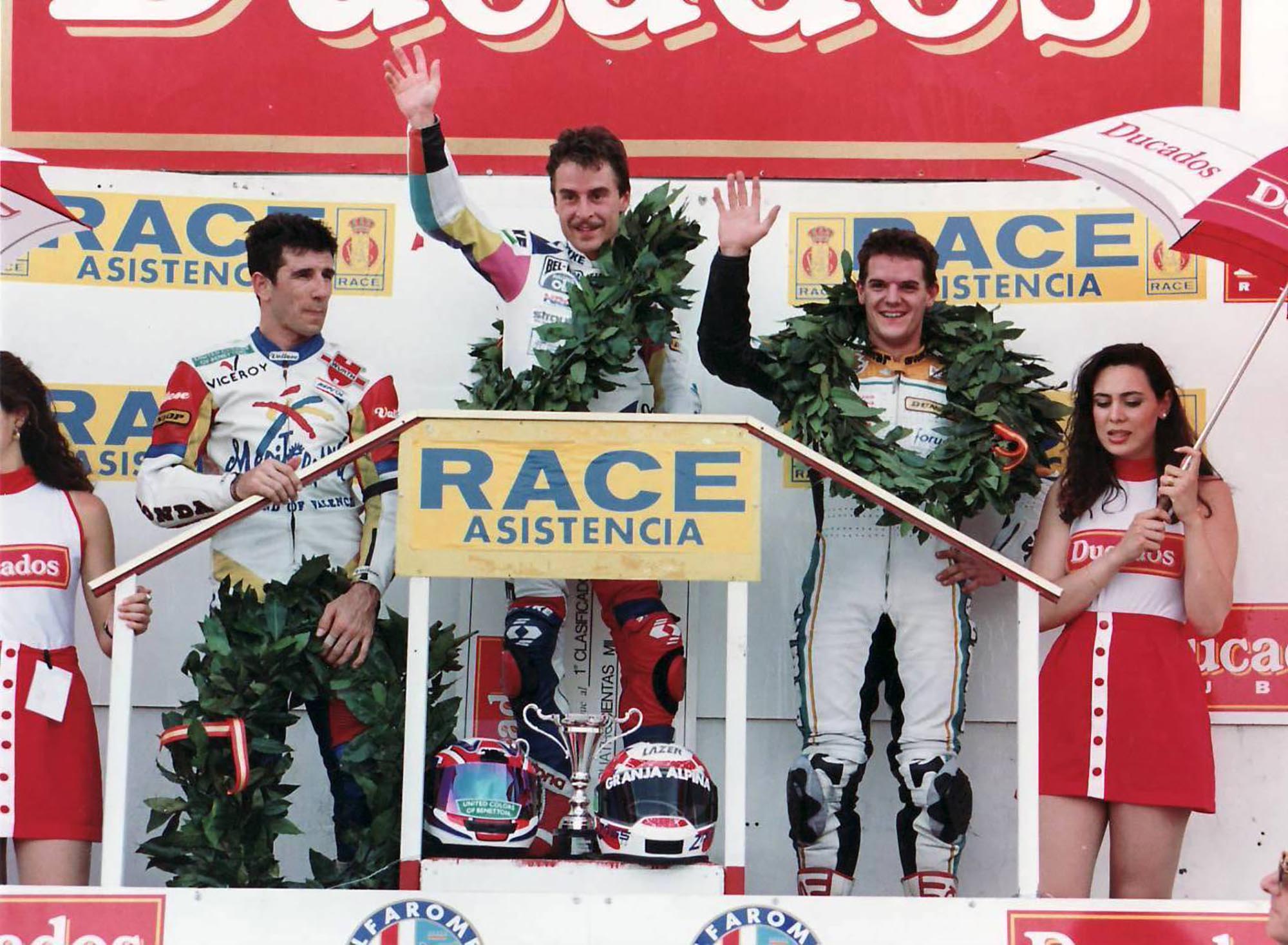 The time has come to take a step forward, to compete with what was then described as Grand Prix bikes. At that time I felt like a pilot and wanted to go as far as possible: to the World Championship, but there was still a long and easy road to travel.

The success in the promotion championships led us to take the next step; Participate in the Championships of Spain and Europe with a Honda RS125R and more enthusiasm and desire than experience and knowledge. I was fortunate to have a good group of friends that organized around me and set up a whole competition team so that I could compete.

Everything was absolutely new; Leaving home and starting to travel around Europe, for countries and circuits where I had never been. The long van trips were an exciting adventure; Intense, fun and often tiring. There was no time to get bored and everything was exciting, from loading or sleeping in the van to training and competing. Discover new countries like England, Ireland, the Czech Republic, Italy, etc. and to develop in them was not an easy task at the beginning but, once in the circuit, it was always the same thing: to compete, to give the best of all of us and above all, to learn in a world in which the competitive level and the requirement was already very high.

In that first season I already had outstanding performances both in Spain and in Europe (I especially remember the Spa career, for the result and for how the Belgian circuit and its surroundings fascinated me).

But at the end of the year the money ran out and the situation had to be reconsidered for 1993. Fortunately, some companies in the region near Sant Fruitós such as Texma, Supeco, Marchal Vallés, or the Alpine Farm and the Catalan Federation along with Honda Spain, the RACC and individuals in particular, helped us a lot to participate in a Championship that was growing very strongly: the Open Duchies. It was, in fact, the Championship of Spain with a very professional structure, both from an organizational and sports point of view and, above all, very competitive. There was live television, the awards were interesting and it was, in short, the best option that was also accompanied by the abandonment of the European.

We were having a very good year and the possibility of participating with our Honda 125 as a wild card in the European Grand Prix that was held in the Circuit de Catalunya emerged. I also had the invaluable help of a historical technician like Ángel Carmona, who joined the structure for the occasion.

Everything was new again and it was the World Championship! We prepared it thoroughly and the results were extraordinary. In training I qualified tenth, something unthinkable at the time, and in the race I was fighting with Jorge Martinez “Aspar” and Ezzio Gianola, two of my idols, and I started my relationship with the 7 since I finished seventh, a single tenth behind the World Champion and with another advantage over the Italian; two pilots with whom two years before I had only been able to dream of facing. It was a great seventh position with a taste of victory.

At the same time and during the weekend, a good friend learned that the Italian team Daytona Pit Lane got out of the Honda 250 to the Dutchman Loek Bodelier and, neither short, nor lazy, went to negotiate with them so that I would get on the bike in the 6 races that remained to be played. It cost the occasional million pesetas contributed by friends and companies. All of them led by the then mayor of Sant Fruitós Ignasi Sala who made a great personal effort to raise the budget. But we made it and while surprising the world over the weekend with my result in 125, I was becoming a 250 World Cup driver.