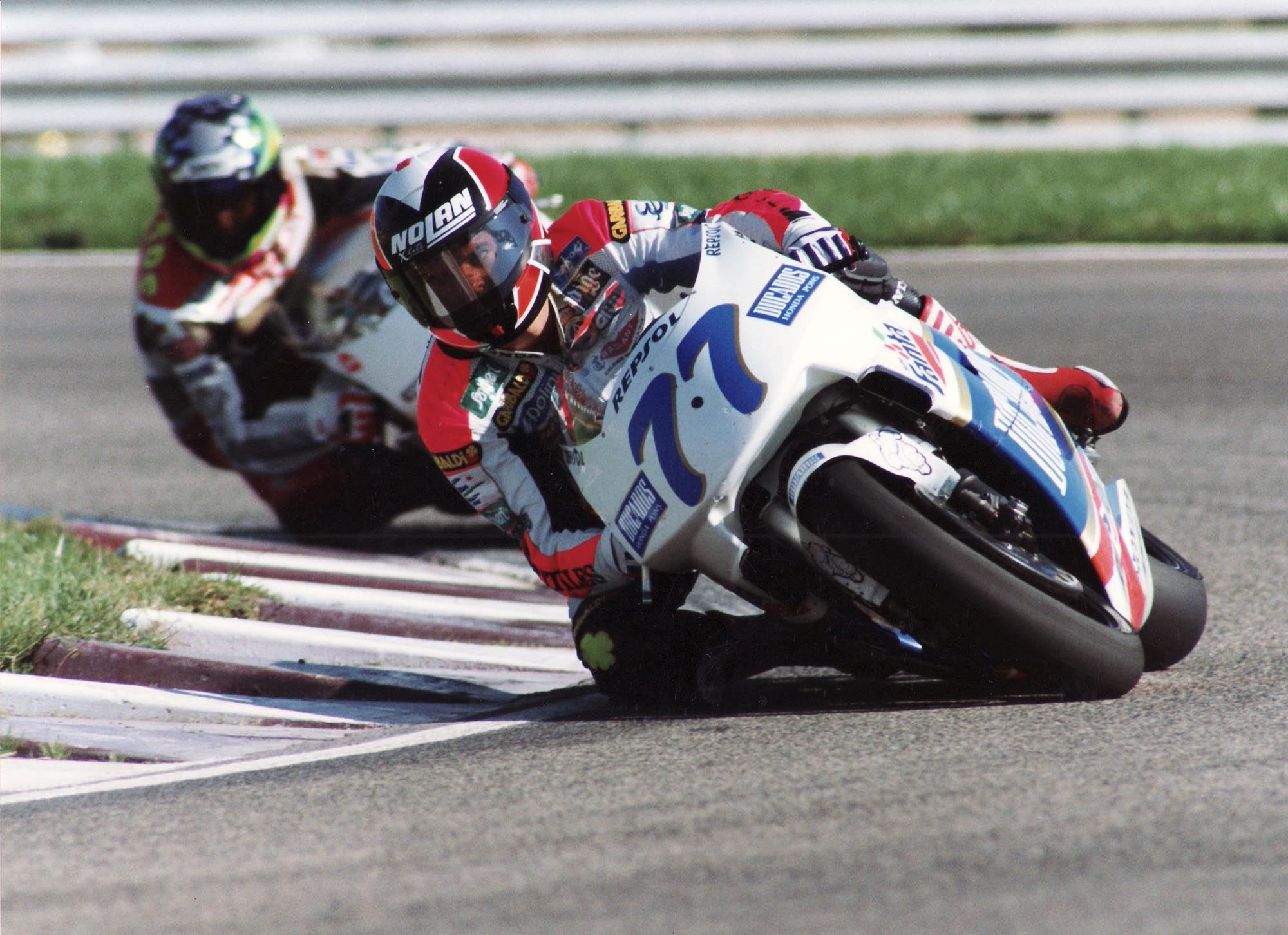 It all started in Mugello

The Mugello circuit is undoubtedly one of the most complicated in the world and there I had to debut in the 250cc World Cup. In the liter room everything happened very quickly.

With just one previous test in Calafat on a standard bike, I went to Mugello nervous and wanting to take the world by storm in the first of the six World Cup races that I had to run with the Italian team. In principle, and despite the fact that I did not know the circuit or the category, I was reluctant to get behind any of the other riders to see where they plotted, braked, accelerated, etc., but they ended up convincing me to do it simply to get used to it as soon as possible. possible to the circuit and in the last practice sessions I already started to achieve decent times to finish my first quarter liter Grand Prix 21st. Also there, I signed my first professional contract with a sponsor; the Nolan helmet brand and I met the one who would end up being my manager and great friend from 1999 until the end of my career, Alberto Vergani.

We were tight on our budget. I had to travel by car on many occasions, sleep in a kind of bed with rails in the team truck that usually transported motorcycles and spare parts and also stay long periods in Italy, specifically at the team’s headquarters, Pesaro. This is how my long and good relationship with the transalpine country began, where motorcycling also raises passions. The experience was extraordinary, because of how quickly everything happened and how I evolved: in the penultimate Grand Prix that took place in Laguna Seca, I already added the two points of 14th place and at Jarama, which closed the season, I qualified ninth beating pilots like Suter, Jean Michel Bayle or Wilco Zeelemberg, established in the category. It was spectacular, but unfortunately it didn’t open the doors of any major sponsor to continue racing the following year.

Everything seemed to go to work at the beginning of 94 until Francesco Pileri, one of the prestigious Italian Team Managers appeared and put the necessary money to complete a season in which I went from being about to not running, to being the best private pilot of the category. Virtually always on the points and on a handful of occasions in the Top 10. I finished 12th ahead of some official drivers.

The end of the season was coming and Albacete welcomed the Solo Moto Superprestigio in the 500 category. Days before the race Jaime Alguersuari called me on my first Motorola mobile that weighed half a kilo, when I had just got on my Seat Panda and told me to get off with the jumpsuit and helmet because I could run. On Friday Sito Pons, with whom I was already negotiating to join his team the following year in 250, told me that it would not finally be possible because it was difficult to round the budget and because a possible bad result could condition the sponsorship. But Batiste Borja, his team’s rider, got injured and after going out on Friday night, on Saturday I was on a Honda NSR500 with the number 77 (the 7 would appear again in my sports career). I was third in the first heat after Crivillé and Barros. There the doors of the Sito Pons team were opened, the confidence of Tabacalera and the fact of knowing that he could pilot a 500 in Albacete with just one hour of training.

In 95 everything looked perfect but it was hard. Our 250cc official Honda had traction problems, the choice of tires did not help and the first results were desperate despite starting fourth in Australia until in a test at the Circuit de Catalunya, my technician, Ramon Forcada tried a change that reversed the situation. We went to Le Mans, my feelings with the bike improved a lot and I stayed at the doors of the podium. Everything had changed, but the most important thing had happened a day before the race: my teammate Alberto Puig, fell at the end of a straight line at 260 km / hour with the NSR500 and broke his leg. A very serious accident that changed his life and mine that in the same 95 closed with the title of Champion of Spain of 250cc. while in the World Cup, I was already up, without having anticipated it, to the Puig 500.